WSO2 has been a remarkable open source middleware platform for enterprises. Mitra Innovation had been working with several large enterprises over a couple of years. Whilst almost every deployment has been done on cloud platforms, there had never been a container based deployment. Mitra evaluated Amazon ECS and Google GCE as a part of their ongoing research by deploying the most common WSO2 deployment. There are significant cost savings for the customer, if they chose independent deployment and by using container based deployment.

This session will cover the WSO2 API Manager, distributed deployment patterns using WSO2 docker, and kubernetes artefacts. We will also discuss developer tips and tricks when deploying these artefacts on GCE and advantages of choosing GCE as the container deployment engine for WSO2 products. 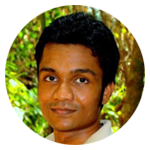 Dileepa Jayakody is a Technical Lead at Mitra Innovation. He is passionate about research and development and currently doing research in machine learning, natural language processing and artificial intelligence domains. He is also an open source software enthusiast and a committer in the Apache Software Foundation.